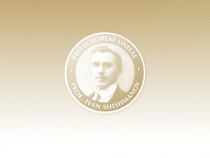 "Prof. Ivan Shishmanov " European Achievement Award was given to Petar Stoyanov, President of the Republic of Bulgaria (1997-2002) on an official ceremony on 7th of October 2019 for his contribution  to the European integration of the country in united and peaceful Europe.

In 2017, PanEuropa Bulgaria established the European Achievement Award in the name of the first Bulgarian guardian for European unity, prof. Ivan Shishmanov, who was also the founder of the Pan-European Movement in Bulgaria in 1927.

The aim of the initiative is to draw public attention to the values ​​of united Europe since the 1926 Vienna Congress of Europeans. Bulgaria's representative at this momentous pan-European event was precisely prof. Ivan Shishmanov, who included in his speech the main ideas that post-war Europe should develop in the direction of peace and unity.

In 2017, the first award “Prof. Ivan Shishmanov" was granted to Simeon Saxe-Coburg-Gotha, within the framework of whose mandate the Treaties of Accession of Bulgaria to NATO and the EU were signed.

The ceremony was organized by PanEuropa Bulgaria, with the support of the Bulgarian Diplomatic Institute, Konrad Adenauer Stiftung in Bulgaria and Aurubis Bulgaria.