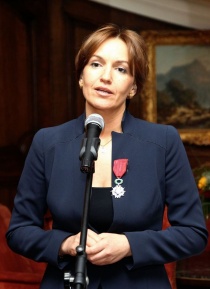 A SKETCH OF ACCOMPLISHMENTS

As a Member of two Parliaments she is very active in the Foreign Affairs, Defense and Security Committee, the EU Integration Committee, as well in the Joint Parliamentary Committee EU-Bulgaria.

She takes a key role in promoting Bulgarian-US parliamentary relations and becomes the first President of the US-Bulgarian Caucus in the Bulgarian Parliament.
As a Deputy Minister of Foreign Affairs she plays a key role in the EU negotiation process in the crucial period of 2004-2005. Deputy Foreign Minister Passy, whose portfolio included relations with the Americas has a significant contribution to the promotion of the Bulgarian – Latin America relations. In that capacity she revitalized the Bulgarian-Cuban relations aiming to promote the human rights in that country. Curiously enough, this Cuban policy was followed up in 2005-2009 by her husband Solomon, in his capacity as Chairman of the Foreign Affairs Committee of the Bulgarian Parliament.

She is devoted to several major human rights causes, including the case with the Bulgarian medics and Palestinian doctor detained by the regime of Col. Gaddafi in Libya.

Gergana Passy is the first Bulgarian Minister of EU Affairs, elected after Bulgaria’s accession to the EU on January 1, 2007.

INTERNATIONAL STATE AWARDS
Decorated in 2010 by the President of the French Republic Nicola Sarkozy with the highest French order Legion d’Honeur for her contribution as a Minister for European affairs and for the French-Bulgarian relations. The decoration comes also for her contribution for the French EU Presidency in 2008, and in particular for her leadership in achieving pan-European standard for the chargers of the cell phones, a project launched by her and her husband Dr. Solomon Passy

OTHER AWARDS
Worthy Bulgarians Award (2011)
Doctor Honoris Causa of the South-West University of Bulgaria (2005).
The first Balkan Peace Award, by the South East European Journalists Union (Turkey) for her contribution to peace in the region (2004).
Award for contribution to social peace from the Turkish daily newspaper “Zaman”.
The American Jewish Committee’s Distinguished Statesman Award in recognition of distinguished leadership to advance the principles of peace, democracy and international cooperation (2002).
Award for long-standing dedication to Euro-Atlantic ideals from the Greek Association for Atlantic and European cooperation (2001).
Honorary citizen of the town of Nedelino (2003).
Honorary citizen of the State of Texas (2004)

HOBBIES and INNOVATIONS
In 2008 Gergana and her husband Dr. Solomon Passy, launched before the European Commission, the EU Presidency and EU institutions the idea for universal standardization of all GSM mobile chargers. The EU bodies, the world GSM Association and the World Telecom Union accepted their motivated proposal which is in effect as of January 1, 2011. This policy will save over 20 million tons of electronic waste and CO2 emission each year and will seriously help countering the global warming.
Gergana and Solomon Passy are holders of certificate for useful model in that regard, issued by the Bulgarian Patent Office

CURRENT HUMAN RIGHTS PROJECT
Gergana and Solomon Passy are currently focused on implementing on EU territory the UN Report (May 2011) which proclaims the access to Internet a Fundamental Human Right. The Passy’s launched an initiative leading to guaranteed pan-European free access to Wi-Fi Internet.